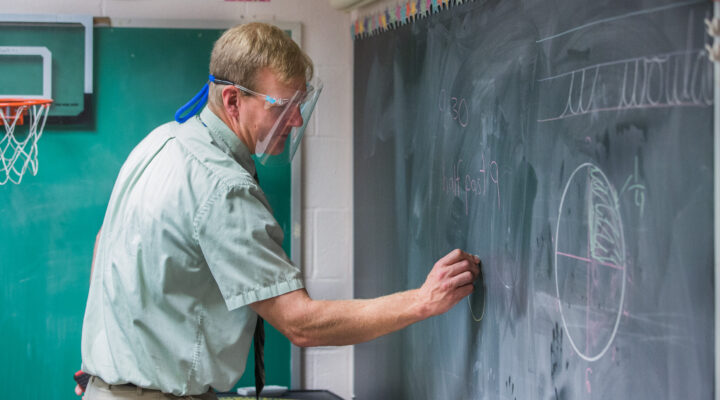 What is Christian Education? Education in and of itself will do nothing to change the heart of a child or society in general. It is out of the heart that the wickedness of man flows and only God changes hearts. In contrast to popular trends, we must base Christian education on the conviction that everything that is taught, all classes, including reading, writing and arithmetic be taught from an inherently theistic, or God-centered, perspective.

Dr. Van Til is saying that there can be no consistent education apart from Christian education. Any system, program, method or plan that does not acknowledge God and His intimate, active and personal role in the world today does not correspond to the “real world.” Since God is active in our world, any system of thought that does not account for His activity is fundamentally and irreparably flawed. The Apostle Paul says: “See to it that no one takes you captive through hollow and deceptive philosophy, which depends on human tradition and the basic principles of this world, rather than on Christ. For in Christ all the fullness of Deity lives in bodily form, and you have been given fullness in Christ who is the head over every power and authority” (Colossians 2:8-10).

Everywhere throughout the Bible we find verses telling us that a proper world-view shows us that God, the Creator, always was, is, and will be. He alone is self-sufficient and His thoughts alone are independent. Colossians 2:10 tells us that Christ is the head, and He alone has authority. We were created by Him and are dependent upon God. He is infinite and we are finite. God’s thoughts are His own and we were made to “think God’s thoughts after Him.”

Despite the clear evidence that the human condition has not improved throughout the millennia, our current secular educational philosophy continues running full-steam ahead with a foundation based on the false assumption that our children can live independent of God.

The Bible is true. God made the universe as He claims, and in Christ, we are made complete. He has the authority described by Paul and is head over all, therefore, how can we hope to begin the study of science or math, much less plumb its depths, without first considering God? Colossians 1:16-17 says that Christ is before all things and in Him all things hold together. God alone is the source of unity and coherence in the universe.

Consistently applied, theistic education, like that found in The Christian School of Grace Baptist Church, is the only education that corresponds to reality. As Christians, we alone have a philosophy of education that prepares a foundation solid enough upon which to build a meaningful educational structure. That foundation is built on God as He has revealed Himself in the Old and New Testaments, His authority, and His rule, in sharp contrast to the traditions and hollow and deceptive philosophy so popular today.

Christian schools can and do teach successfully about the world because God has revealed its fundamental nature. This is not a school where we teach our children to “find God” but rather we tell them that God has already revealed Himself in His Word and it is their responsibility to submit to His revealed will. We are a school based on revelation, not on the power of self-discovery.

Christian teachers are not effective because they are smarter or more diligent but because they know that understanding itself comes from God. Here is the method by which we can achieve true learning. The Christian School of Grace Baptist Church is firmly convinced that God is at the center of every subject and class. This conviction gives meaning to everything that is taught. This school understands that unless we acknowledge that God is at the center of His universe, there is no foundation upon which to build understanding and wisdom in the minds of our children.

Our times merit the prayerful consideration of every Christian parent as to the means we employ in meeting our obligation to train our children. The Christian School of Grace Baptist Church provides an environment that is relatively free from many of the dangers in our society, produces better results than its public counterparts, and teaches Christian morals and ethics. What is much more significant, however, is that it teaches our children that they must submit their minds and hearts to a God-centered world view, as revealed in the Bible, if they are to be truly educated.

Our school is a member of the Association of Christian Schools International.
“The fear of the Lord is the beginning of wisdom.” — Proverbs 9:10a 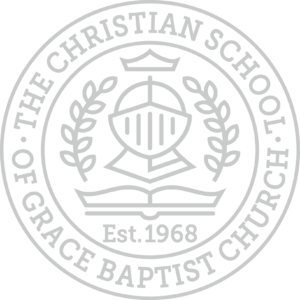